Apologies for the long silence this is partly due to busyness but mainly due to the things I have been busy with being boring. Since Christmas it has been full speed ahead on the good ship fundraising. Writing funding applications is a very useful skill to be practising but does not make for existing blogging. However last week nearly the whole Adopt-a-Monument teem escaped the office to go to Braco.
We were chatting to Perth and Kinross Heritage Trust, Historic Scotland and the local group (Ardoch Development Trust). Mainly about the amazing Ardoch Roman fort (http://www.armadale.org.uk/ardoch.htm) and its lack of interpretation, but also about what to do on the village tour front. It was decided to get a new board about the fort and produce a leaflet for the village tour. So I have been having a happy time researching various aspects of Braco’s history for a leaflet, which is much more existing than funding applications. Especially good when you come across things like this in the Old Statistical Accounts:
“It has already been observed, that the two large encampments had a communication with one another; and, that there was a subterraneous passage from the small one, under the bed of the river, is more than probable, from a circumstance now to be mentioned.
There was a hole near the side of the pratorium, that went in a sloping direction for many fathoms; in which, it was generally believed, treasures, as well as Roman antiquities, might be found. In order to ascertain this fact, a man, who had been condemned by the baron court of a neighbouring lord, upon obtaining a pardon, agreed to be let down by a rope into this hole. He at first brought up with him, from great depth, Roman spears, helmets, fragments of bridles, and several other articles: But upon being let down a second time, was killed by foul air.
No attempts have been made since that time. The articles, above mentioned, lay at the house of Ardoch for many years, but were all carried off, by some of the soldiers in the Duke of Argyll’s army, in 1715, after the battle of Sheriffmuir, and could never afterwards be recovered. The mouth of the hole was covered up with a millstone, by an old gentleman, who lived at the house of Ardoch, while the family were in Russia, about the year 1720, to prevent hares from running into it, when pursued by his dogs; and as earth, to a considerable depth, was laid over the millstone, the place cannot now be found, although diligent serch has been made for it.” (Accounts of 1791-99, volume 8, ‘The Parish of Muthill’ Rev. Mr John Scott)
Anyway hear is the first draft of the leaflet the group may well wish to change it entirely and we don’t yet have perditions to use some of the pictures but we shall see what happens. 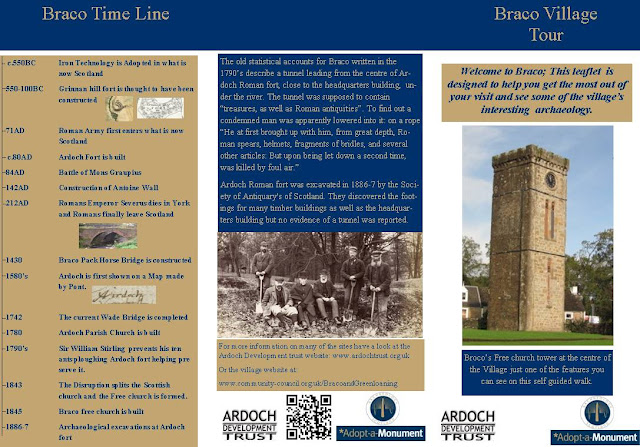 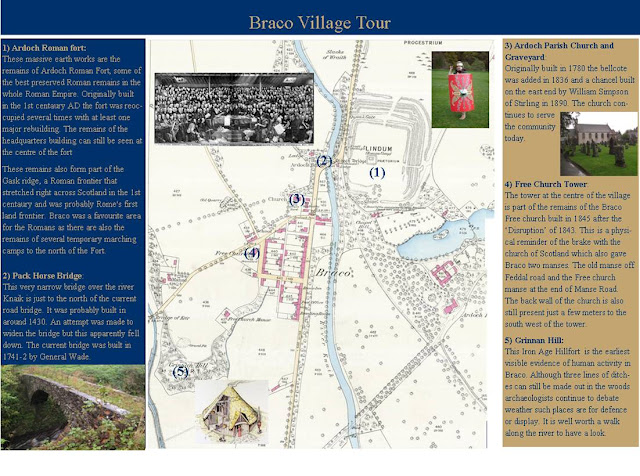