Makkamappa: It may just be me but using software that is not developed by Microsoft can be a bit confusing. Thus it is that it has taken me until today to work out how to add pictures to my Makkamappa tags. As you may remember I was getting excited about this program which can be used to rectify any map agonised a Google map and used as an App. This allows people to wander round looking at their location on an old map. The implications for archaeology are fantastic as it’s basically a free and easy way to locate old features (providing the map is roughly accurate) without the need for EDM’s or other posh equipment. This makes exploring places past more fun too.
Although you do need the URL (whatever that is) of the picture (which realistically seems to mean putting the photo you want to use on Flicker first) this makes Makkamappa even more useful than I thought. We can get groups to take pictures of interesting features on their monument or in there town and once people have found the place using their App the important things can be shown to them as well as being described. An interpretation board that follows you about! (although that is slightly close to pythonesk keep left signs it would be more friendly)
If you have an iphone, ipad or a phone that runs with Android you can now see the first fruits of this discovery by uploading my map of Dingwall from:  http://makkamappa.com/maps/1412
Photosynth: This program developed by Microsoft allows you to make 3D models of things simply by taking lots of photos of them and uploading them to the website. What I had not realised is you can also ‘geotag’ them. This means you can not only put your modal on a map but accurately scale and orientate it too. Who needs GIS or laser scanning? Not only is this easier to use it gives results that are easier to understand it’s also FREE!!!
Have a look at my attempt at an abandoned structure near Stirling: http://www.bing.com/maps/explore/#5003/0.6793=ps::dtpfilter:All:cid:d4b2f84b-fa85-41ac-be1b-13acbc2bb253:poi:Normal&n=0/5872/style=a&lat=56.20906&lon=-3.745316&z=9&pid=5874
Mine is called Abandoned Settlement near Dnyit, Stirling 2 (not as catchy as it might be) try clicking and see what happens.
Finally on a totally unrelated note hear is an article about an existing site I was lucky enough to dig at in the summer. Watch this space… http://www.socantscot.org/article.asp?aid=1747
Posted by Lachlan at 05:46 No comments:

Cara spotted a blog talking about some interesting ‘preservation’ of graphite being done using QR codes. It seems ‘Sweza’ has been going round taking photos of graphite and when it is removed or painted over placing a QR code (one of those square bar code things) in the spot. The QR code allows people with smart phones to scan it and link (in this case) to a picture of the graphite as it was or as they put it ‘to travel back in time’. I do wonder a little what stops the QR code being removed like the graphite was but I suppose it’s a bit less offensive?
http://sweza.com/graffyard/
﻿﻿ ﻿﻿However in a more general archaeological sense this technique could be used to show people what archaeology was discovered beneath buildings, roads and even in fields. Simply attaching a small QR code to a wall, lamp post or fence post would allow anyone with a smart phone to link to information on a site. This could be really useful on sights where there is restricted space or a new use. It might mean getting public friendly reports online as well.

On a less serious note you may enjoy (or disapprove of) this:
http://vimeo.com/mudlevel/robo-rainbow
Posted by Lachlan at 03:27 1 comment:

A Matter of Interpretation Yesterday we had a meeting in the office with the graphic design company Flintriver about interpretation panels at sights for groups. This got us thinking about interpretation so on the principle that seeing things for real is much better that just talking about them Cara took me along to Preston Grangeto see their interpretation. This is an old coal mine, brick and tile works now turned industrial heritage museum just east of Musselburgh. If you are interested in industrial archaeology this is defiantly the place to go. The area is scattered with huge bits of industrial archaeology that you are free to wonder round. Some of these are associated with the mine and works and others have been brought for the museum. It has a grate feel as there is very little interpretation and you are left to wander of your own accord so its like you are stumbling across these amazing objects. On reflection I think more museums should be like this as it feels like you are making discovery’s rather than having someone show you things, which is much more exiting. 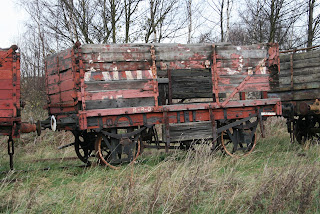 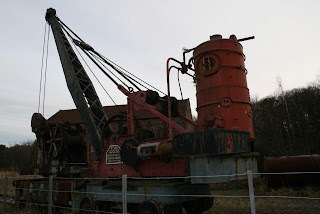 The interpretation at the site is delivered on a variety of boards in different states of preservation. The most interesting though were two old photos that had been printed onto perspex and mounted between posts. The perspex is positioned so the visitor can line up surviving structures with those in the picture and so see what the spot looked like in the past. Although this would not work on every site I think the principle hear is quite exiting and could perhaps be used with reconstruction drawings that tied in using natural features like hills. I certainly know that when I visit a site I am unlikely to read information boards but I may glance at a picture and used in this way they could really bring a monument to life.
﻿﻿﻿﻿ 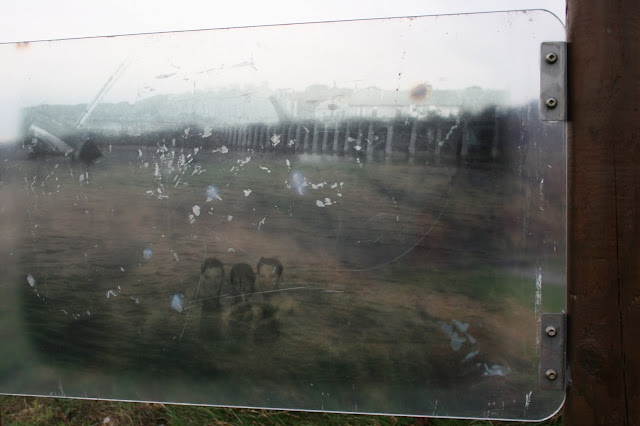 The other verity of interpretation being used is an audio tour accessed using your mobile phone. This could be great in areas with reception but I wonder how many people are willing to spend money to get interpretation?
﻿
﻿

The Minding Merkinch Project got underway this weekend with our first workshop ‘Memories of Merkinch’. This was an oral history drop in session were local residents came and told us about their memories of Merkinch. After a slow start on Friday night we got a few hours of good recording from a range of people. The younger folks on Friday were provided some tales of Merkinch Primary and the older residents on Saturday confirmed that not too much has changed in the school in the last 60 years.
The best story of the day defiantly goes to two gentlemen who wile taking us on a tour of Merkinch in the 40’s stoped to tell of a lady they both remembered from their childhoods:
‘No one more like a witch were you ever likely to see going round the place on a big black bicycle with a basket on the front…and she had a big red nose so she never needed a light…’
Needless to say some of the story was lost in the ensuing mirth but the rest of the tour will make a valuable addition to the local archive and I may not look at old back bikes in quite the same way again.
﻿
As well as providing some grate stories for the archive the workshop has also provided some direction and new information on what features people in Merkinch find interesting. These include the welfare hall on Grant Street and St. Michal and all Angles church on Abban Street which in 1902 was taken down and moved from a street across the river. The next workshop will hopefully be on photo recording and we can get out and about to record some of these buildings as they are now.
If you would like to follow the Mirkinch project I have just set up a Facebook group at:  http://www.facebook.com/pages/Minding-Merkinch/301237556573411
Posted by Lachlan at 07:26 No comments: